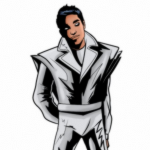 Meh I am just a long time editor of Wikias....had my very first edit t Around 2012 to late 2013 as an anon....made an account early 2014....got perm/IP banned by wikia staff over petty drama with another wikia who harassed me but got back after they saw me change from that experience been a huge editor ever since.

Been a fan of berserk for years didnt know it actually had a wikia until Mid 2016.

Retrieved from "https://berserk.fandom.com/wiki/User:BeyonderGodOmnipotent?oldid=81198"
Community content is available under CC-BY-SA unless otherwise noted.