The Keeper of the Hounds was an Apostle formerly in a Count's services who was left to guard his former master's mansion.

He was the first Apostle slain by Guts after he escapes the Eclipse and serves a larger role in the 2016 anime.

In his human form, the Keeper appeared as a short, stocky, bald man with small black eyes, misshapen teeth and a pug-like nose. He wore ragged clothes that were caked in dirt.

In his Apostle form, a giant upright canine beast was grown around the Keeper with only his human form's torso sticking out under the chin of a demonic short-snouted canine's head with a mouth full of tusks and uneven teeth.

Though a servant of the Count, the Keeper was more loyal to the hounds he was entrusted with and expressed murderous rage to anyone who would do the dogs harm. Thus, he was often ignored and regarded as a misfit in the Count's court. The only other thing he cherished besides his dogs was the mount of his "love", the only woman who showed him kindness.

In the original manga, he had little to no character besides being a dedicated chaser and highly gluttonous. He served as the first enemy to Guts after the Eclipse, and as such was only concerned with eating him and the others in the home. His mind was very dull and he spoke in short, choppy sentences, and crawled on all fours when going long distances.

The Keeper could telepathically command his hounds, even in their possessed state, and could sense that Guts had been a survivor of the Eclipse. In his Apostle form, he grew to tremendous size and could use his canine body to smash through solid concrete along with his powerful jaws. When slashed open, he revealed the ability to control his own intestines like tentacles. 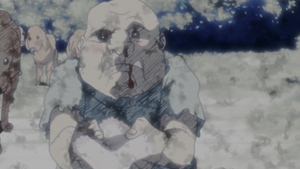 Originally serving Count Lansdown, the Keeper was a misfit in his master's court who deemed him as "ugly and inferior", in stark contrast to the count's hounds, who never judged their kennel master and were always loyal. He found a Beherit fetched by one of the dogs. One day, the Keeper met the count's daughter, who treated him with kindness and believed in him. However, she didn't return his advances. His despair summoned the God Hand and he sacrificed her. Compelled by his transition, the Keeper thus ripped the woman apart in his jaws as payment. The Keeper then salvaged "his lady's" remains and mounted her bust in the mansion's foyer, remaining in the mansion long after it had been burnt down five years before the events of the series.

In the manga, a month after the events of the Eclipse, the Keeper was wandering around the countryside and messing around in a puddle. Two farmers carrying their hay in a horse-drawn carriage accidentally run into the Keeper and express their disgust towards him while berating him for being in the middle of the road. It was at that time that the Keeper smells Guts from several miles away, and begins making his way to Godot's home to find Guts.

Once the Keeper finds Guts as he was preparing to embark on his quest of revenge, he promptly assumes his Apostle form to slaughter the swordsman, Godot, Rickert and Erica. While Guts manages to cut off the Apostle's arm with one sword before its blade shattered while slashing the monster's stomach, the cannon arm's blast having as much of a fatal impact, the Keeper is finally killed by Guts using the Dragon Slayer to promptly cleave him in half.

In the 2016 anime, his background story revealed, the Keeper makes his presence known to Guts when he entered the mansion to fend off the Count's hounds when the dogs are possessed by the spirits. The Keeper, livid that Guts killed the hounds, vows to make him pay as he assumed his true form to fight him. It was when the Keeper noticed Puck interacting with the woman's remains that he lost his focus and was defeated by Guts. Guts than proceeds to torture the Keeper for the whereabouts of the God Hand before killing him when the Apostle reveals to have no idea where the God Hand are.

Retrieved from "https://berserk.fandom.com/wiki/Unidentified_Roaming_Apostle?oldid=83543"
Community content is available under CC-BY-SA unless otherwise noted.