Volume 39 of Berserk will be released on June 23. 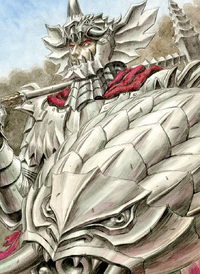 Berserk's first novelization Berserk: The Flame Dragon Knight has been revealed and is slated to release on June 23. It will cover the background of the legendary apostle Grunbeld. (source)

Retrieved from "https://berserk.fandom.com/wiki/Template:Updates?oldid=61116"
Community content is available under CC-BY-SA unless otherwise noted.