Sacrifice (サクリファイス, Sakurifaisu?) is the second opening theme for the Berserk 2016 anime and is performed by 9mm Parabellum Bullet. The single will be released on June 7th 2017.

As the sun rises over the clouds and mountains, creating a beautiful picture the scene pans outward to reveal Guts' sleeping face, bloodied and exhausted. Puck sleeps soundly on a nearby brick, using a leaf as a blanket. As the morning begins, Puck awakens to see Guts still asleep; firmly grasping a sleeping Casca's arm. Panning out, Guts is fully shown asleep as he holds into Casca subconsciously; having protected her from a bloody battle the night beforehand. The scene shifts to Guts' Brand of Sacrifice, with dried blood still stuck to it. Puck looks out on their allies, Farnese, Schierke, Isidro and Ivalera who were already awake and call out to Guts to wake up. Serpico looks off at a nearby village as Casca slowly wakes up from her slumber. Farnese continues to call out to Guts as the others ready themselves for another day. As Casca walks off with them, Guts finally awakens; barely able to stand and using his greatsword as support. Readying himself for another battle, Guts opens his eye and quickly trails after Casca.

The scene immediately shifts to the middle of Enoch Village, with the party being attacked by trolls. Casca recoils in terror as Guts swiftly slices the attacking troll in half as Isidro assists him. Guts continues to slice the troll into pieces as Farnese restrains Casca. Serpico leaps into the air, using his Sylph Sword to slice three more trolls to ribbons. Isidro quickly finishes off one troll using his sword and Salamander Dagger while Puck stuns another troll with his "Puck Spark Attack". Schierke casts a spell, destroying two more trolls while Farnese frantically stabs another with her silver dagger. The scene cuts away to a blood red background with several silhouettes of Apostles flashing by. Sonia runs towards the screen with a joyous expression on her face, all while war banners flash by along with Mule Wolflame attacking. Sonia leaps into the air and spins happily, outstretching her arms as if to embrace an unseen person. The camera zooms into the reflection in Sonia's eye to reveal Griffith, cloaked in his silver armor while looking back as Sonia greets him.

Cutting back to Guts and his party amidst a stormy sky, everyone assumes battle stances while Guts simply glares ahead. Quickly shifting to a battlefield of massacred soldiers, Nosferatu Zodd and several other Apostles, including Raksas, Locus and Grunbeld bow and swear fealty to Griffith. Griffith looks down at them as the wind blows through his hair while the sun sets. Suddenly, Griffith closes his eyes and assumes a bloodthirsty, murderous expression. Now nighttime once again, Guts howls in pain towards the sky as the Berserker Armor forcibly dons itself. The helm snaps shut as its visor glows red. Guts draws the Dragonslayer and jumps into battle. The scene quickly cuts to Casca trying to loosen her hand restraints using her teeth, then again as Schierke cries while witnessing the death of a loved one. Shifting back to Guts once more, he swings his sword as his friends remain behind. Guts leaps ahead in an animalistic manner, all while Griffith embraces Sonia as they both look up at the moon. The scene cuts back to Guts; his face barely visible through the Berserker Armor's helm. Guts looks up, showing his face though the crimson visor as his expression is twisted into one of pure, murderous rage. 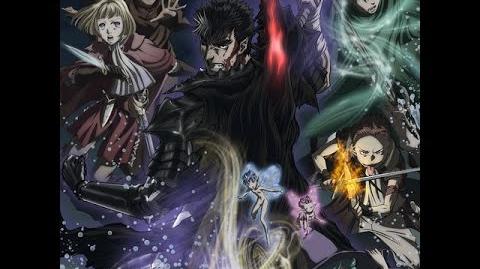 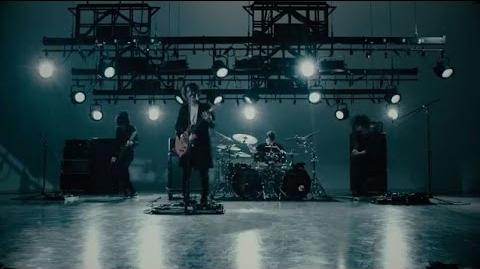 (The lyrics below are from the TV version and therefore, incomplete. Please expand once the full lyrics become available.)

Retrieved from "https://berserk.fandom.com/wiki/Sacrifice?oldid=61112"
Community content is available under CC-BY-SA unless otherwise noted.