S&D Commander of the reborn Band of the Falcon

It's still too early to leave. We haven't yet seen blood.
– Rakshas

Rakshas is a mysterious figure exiled from the Kushan clan of the Bakiraka prior to becoming an apostle, and presently the commander of the demon search and destroy squad of Griffith's Band of the Falcon.

His powers appear to be amorphous shape shifting, enhanced agility, and exceptional stealth. He possesses notable knowledge of both sides of the war between the Kushans and the Kingdom of Midland, as well as several mysteries in the storyline.

Completely black, resembling a cloak that can alter its shape. Rakshas is also faceless with the only features being three eyes and a slight protrusion of his nose. He originally wore a mask with the spikes on the bottom resembling teeth, replacing it with one with feather-like carvings around the eye holes after Silat destroyed it.

In apostle form, he becomes larger and more monstrous, his tentacles gaining more dexterity, but otherwise looks similar to his 'human' self. When flying, the many amorphous protrusions appear to resemble hundreds of bat wings.

Rakshas' stated motivation for allying with Griffith is so he can ensure that one day he will be the one to cut off his "beautiful head"; nevertheless, he appears intimidated by Griffith. He has an arrogant and demeaning personality, belittling the Tapasa for their slow reactions to his movement and marking such evidence for the Bakiraka's fall. Rakshas' pride appears to be mostly centered on stealth, as he is never shown in battle and seems to avoid it as much as possible.

Rakshas is a hedonistic killer who plays with his victims before the kill, which is considered heresy within Bakiraka. He is also described by Silat as relentless when chasing a target.

Rakshas has a close attachment to his mask, becoming depressed enough to retreat from battle after it was broken by Silat. Rakshas seems to be a very quiet person, forming strings of words rather than sentences as he notices things, only taking the time to properly speak when addressing people directly, but his speech devolves as battles become more chaotic.

Rakshas is a master of assassination and camouflage, having easily snuck up on and dispatched some Kushan assassins who were attempting to take Griffith's life with Zodd failing to notice them. Due to his apostle body making him amorphous, using his shape altering abilities in various ways, Rakshas can blend into the shadows to benefit his assassination skills, even secretly witnessing the death of Ganishka. He is also very agile and deceptively strong, able to battle evenly with the likes of Silat and the Tapasa. His amorphous body can form various blade-like appendages used for gripping and slicing. What's more, Rakshas is able to move at deceptive speeds, as he moved from a statue away from Rickertt to right behind the youth in mere moments. Rakshas is also a highly skilled martial artist, having been trained in the fighting style of the Bakiraka, explaining his familiarity with their weapons.

Rakshas also has the ability to move his face to any point on his body, a tactically brilliant move as his only weak point appears to be his head. Silat appeared to have won their first battle by slicing clean through his mask, only to find that Rakshas' face and head were not behind it at the time. A thrown piece of stone was launched at him, and he came out of the wreckage entirely unharmed.

In apostle form, Rakshas gains the ability to fly and becomes much stronger, capable of smashing through the roof of a house and lifting a horse into the air with a single appendage. In such a state he also turn his cloth into scythe-like tentacles that can slice large animals in half.

However, Rakshas seems to have an antagonistic relationship with things bright or hot. When set ablaze, he cried that he did not like the light.

Rakshas first made his presence known when the New Band of the Falcon first formed when Griffith liberated a city occupied by the Kushan invaders. Fending off Silat's Tapasa, the former recognizing him as an outcast from their clan, Rakshas reveals his only reason of joining Griffith's group was so he would have the pleasure of killing him personally when the time comes.

During Griffith's plan to rescue Charlotte under the guise of an all-out attack on Wyndham, Rakshas lures Silat to where the Daka were being created. Once Silat witnesses one of the Daka birthed from one of the captive women who died from her child's mutation, Rakshas reveals that Ganishka is not human. While this event leaves Silat disgusted with Ganishka, Rakshas' reasons to divulge this revelation are still unknown.

Later, during the final battle against Ganishka after he transcended into a god-like being, Rakshas concealed himself under one of Zodd's wings as Griffith flies to the top of Ganishka's god-like form, being a witness to the events that caused the Great Roar of the Astral World.

After Griffith establishes Falconia, Rakshas attempts to assassinate Rickert after the latter's encounter with Griffith. But Silat and the Tapasa force Rakshas to flee after his mask is broken by Silat, promising to come back after Rickert after nightfall.[1] True to his word, Rakshas resumes his hunt with a new mask, but falls into a trap set by Rickert and Silat. Although he manages to fight off Rickert and Silat, he is doused in flame by the Tapasa using Rickert's modified water-spraying machine. This forces Rakshas to assume his true form, taking to the air while using the blood of a horse he killed to put out the fire and then capture Erica.[2] Erica is rescued by Daiba who manages to distract Rakshas with snakes and rats attacking his cloak. Rakshas tries to fly after Rickert and the others as they escape using Daiba's garudas. However, Rickert fired a rocket at Rakshas from point-blank range when he pursued, ripping his body in two, allowing them to escape. 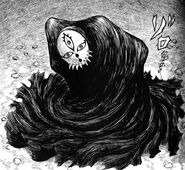 Rakshas vowing he will one day kill Griffith himself.

Rakshas becoming one of the reborn Band of the Falcon's generals.