Can you not hear them?! Every person congregated in this place now desires, as one heart, salvation. They are eagerly awaiting the time of God's victory!
– Mozgus

Mozgus was one of the chief inquisitors of the Holy See, traveling the world with his group of torturers, having been sent to root out a violent cult of heretics in the city of Albion. He was the main antagonist of the Conviction Arc, hindering Guts' efforts in saving Casca with his excessive religious zeal. His symbol was four breaking wheels, embodying his willingness to use torture as a way to "cleanse people from evil".

Mozgus was a tall man with pale skin and blue eyes. His most distinguishing feature was his smooth, almost flat face that was the result of years of prostration, where he harshly kneeled and slammed his face into the floor. During his prayers, and whenever he was angry, his face became swelled with veins and he took on a much more intimidating appearance. He wore a traditional pontiff's garb, white with gold trimming and a red cloth that had the insignia of the Holy See. Lastly, he wore a red, wide-brimmed hat with ear covers.

After the Egg of The Perfect World turned him into a Pseudo-Apostle, his transformed state became a reflection of his religious ideals. He gained large, white-feathered wings that he was able to use in his human form. In his transformed state, his feathers turned grey and hardened, giving a similar appearance to closed fists. His body became completely encased in the hardened feathers, giving him an armored, scaly appearance.

An ardent follower of "God", Mozgus was an extremely devout man whose faith ventured into fanaticism. He greatly emphasized his religion in everything he did. He traveled with his torturers, whom he respected and treated as his children.[1]

Mozgus was known and feared for his intense zeal to purge the world of "heretics".[2] He was infamous for using painful and varied forms of execution and used torture to "purify" those he saw as heretical. He had tried and questioned hundreds using his brutal and intense methods of religious interrogation.[3] Mozgus was highly sensitive toward anyone who would "claim" God's will, such as when he brutally killed a rebel for saying he would be punished by God for his arbitrary acts.[4]

Despite appearing sadistic and bloodthirsty to most who did not know him personally, Mozgus knew of the sadness that enforcing God's strict laws entailed, as they brought pain to others. Still, he felt no guilt for his actions.[5] In his mind, torturing a person in the name of God was a necessary and sacred act; he viewed it as the only method of turning non-believers toward the light of the Lord. This was especially shown during his parable of the holy woman and the dying man, where he taught Farnese that a person knows not what succeeds in helping.[5]

Mozgus showed a kind side toward the downtrodden, sick, poor, misshapen, and deformed as his personal torturers were those he personally recruited in his travels, despite their rejection from the rest of the world. He taught them that God needed people with their unusual appearances and hearts filled with hatred from the days where they were driven away with people.[1] Father Mozgus did not fear death in the slightest and demonstrated immense valor, such as when he and his torturers were cornered by the physical malice in the Tower of Conviction. When he was finally killed by Guts, he expressed no cowardice or fear, instead feeling joy in the fact that he would finally be able to be with God in "heaven".

After being transformed into a pseudo-apostle, believing his new powers were a gift from the divine, he displayed the following attributes and abilities:

God's Armor: In his more monstrous form, Mozgus acquired a stone-hard scaly hide that covered his entire body. The armor was impervious to all weapons, even resisting damage against the infamous Dragon Slayer. However, due to Mozgus' previous wound before the transformation, a small crack in the armor formed around it. Guts was able to exploit this and blow the armor's crack open with the use of many explosives.

God's Breath (ゴッドブレス Goddo Buresu): Mozgus was able to breathe fire, which could incinerate anything caught up in the flames. This power also caused flames to naturally leak from Mozgus' mouth while he spoke.

Angelic wings: Mozgus also gained a set of large, white angelic wings that allowed him to fly. He could alternatively shoot the feathers from his wings as blades. In his second transformation, Mozgus could use his wings as a second set of arms to perform a variety of more devastating attacks. These included:

Immense strength: In his original human form, Mozgus displayed a large amount of strength when he killed one of his would-be assassins out of anger with only his scriptures tome. After his transformation into a pseudo-apostle, Mozgus' strength increased to inhuman levels.

When the Holy See hears of unrest in the city of Albion due to the rise of a pagan cult that has murdered some of their priests there, Mozgus is sent to root them out. Mozgus personally requests the Holy Iron Chain Knights as his personal guard to escort him among the refugees heading to Albion to escape the plague. On the way, the group is attacked by rebels who are out for revenge against Mozgus for slaughtering their loved ones after their village decided to restock their food supply rather than donate to the church. Ultimately, Mozgus expresses content that none among his faith died in the fight, the rebels failed, and those that survived were lined up so the inquisitor could give them a lecture that dispatching their "heretical people" is part of Holy See doctrine. When one of the rebels vows that God will punish Mozgus for his actions, the inquisitor snaps and smashes his bible on the man's skull for speaking such blasphemy. Mozgus then regains his composure before ordering his disciples to execute the remaining rebels with death by breaking wheel and resuming their journey.

Once in Albion, making residence in the Tower of Conviction, Mozgus rules the city with an iron fist. Though the pagan cult have taken to practicing their faith in the mountains surrounding Albion, Mozgus focuses on torturing those among the poor and starving population, whom he sees as heathens that must be cleansed through pain and death. Though Farnese attempts to convince him to be less strict with his methods to keep the people from being disillusioned with their faith, learning he is not as evil as he appeared upon learning more of his disciples, Mozgus uses their scripture to justify his actions to be in the right.

After the pagan cult is finally discovered with its surviving members captured, Mozgus assumes Casca to be their leader and considers torturing her for information on Guts. When Mozgus sees her Brand of Sacrifice, he concludes that she is a witch and has her placed in an iron maiden. Believing what occurred soon after to be God's work, Mozgus unknowingly causes the first phase of the Incarnation Ceremony as the blood of countless victims within the tower stir to life. Mozgus is taken by his men to the chapel on top of the tower to protect their leader, who welcomes the threat he considered to be a test of his faith. As the blood surged into the chapel, Mozgus and his disciples all end up being "reborn" as a pseudo-apostle by the Egg of the Perfect World.

The inquisitor, believing the transformation he and his men underwent is God choosing them, captures Casca after freeing her from the blood blob and spirits her off. Mozgus assumes at that time that the raising dead are Casca's doing and that the chaos will cease once she is burned at the stake. When Guts arrives to save her, Mozgus was anxious to fight him until the Bird advise his mentor to let him and the other disciples deal with him while he and the Twins carry out the execution. Proclaiming himself as God's chosen, Mozgus leaves Casca in the custody of the desperate refugees as they build the pyre while he and the Twins hold off the mounds of animate corpses from reaching the city. But after creating a barrier to keep them out, Mozgus notices Casca being saved by Isidro and goes after them before he finds himself impaled by Guts. But Mozgus' bible shielded him from the blade as he fully transforms into a pseudo-apostle.

Mozgus has the upper-hand in the beginning of the battle, nearly killing Guts as the flames keeping the corpses at bay die out. Mozgus, focusing more on Guts than the greater threat, offers the swordsman a chance to live by putting the lives of the refugees wanting salvation ahead of Casca. But Guts, having found that the attempted deathblow he inflicted on Mozgus left a weakpoint in his armored body, refuses and uses his bombs to open the crack on Mozgus' chest wide enough to drive his sword in. His body being consumed by his own flames, Mozgus accepts his death as him getting to meet God soon while grabbing Guts as a final attempt to kill him. But Guts uses his weight and flips Mozgus over the wall of Albion, the burning inquisitor falling to his death. Ironically, the flames from Mozgus' charred body enabled some refugees to survive being consumed by the dead.

Mozgus indirectly appears during the journey of Farnese and Schierke in Casca's mind as a projection of Farnese's memory. He is firstly seen as a washing-stone which resembles his face used by Farnese. During the continuation of the journey, Mozgus is summoned several times by Farnese in order to help them to proceed without harm. Mozgus' head was summoned later on for fighting the wicked creatures encountered as well as descending more deeply into Casca's mind.

Mozgus emerges after his disciples quelled his would-be assailants.

Mozgus instructs Farnese to observe the torture of sinners.

Mozgus explaining significance of the tower in the Holy See's history. 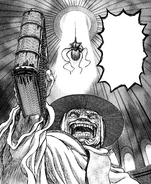 Impaled by the Dragon Slayer.

Mozgus stares down Guts in their final battle.

Mozgus dies as he is thrown off Albion's outer battlement.

Mozgus is protected by the Holy Iron Chain Knights in his caravan.

Mozgus instructs Farnese to gather his would-be assassins before having them executed.

Mozgus "comforts" a terrified woman about to be tortured.

Mozgus commands Farnese to watch what fate befalls heretics of the Holy See.

Mozgus' bizarre ritual, consisting of slamming his face on the ground one-thousand times in prayer.

Mozgus and his disciples cornered by the deadly congealed souls.

Mozgus makes a last stand against the demonic invaders.

Mozgus and his disciples prepare to battle Guts.

The Bird tells Mozgus not to worry himself with killing Guts.

Mozgus unfazed after Isidro and Puck's comical surprise attack on him.

Mozgus is heralded as an "angel of God" by the people of Albion.

Mogzus reveals that his bible protected him from Guts' attempt on his life.

Mozgus sheds tears of blood for his fallen disciples.

Mozgus prepares to launch a sneak attack on Guts.

Mozgus stares down Guts in their final battle.

Mozgus dies as he is thrown off Albion's outer battlement.

Mozgus' appearance in Berserk and the Band of the Hawk.