The jötnar (, Kyojin (Yotun); literally "Giant") are a race of giants that appear following the Great Roar of the Astral World.[1]

The jötnar are ravenous and antagonistic toward humanity, killing and eating humans as well as taking their goods as war equipment. They are known to be a warrior race.[1]

Unlike other astral creatures, the jötnar have demonstrated a certain degree of intelligence similar to humans. Their leader seems to keep several trolls as pets of sorts. They can organize to fight battles against humanity and apostles, using a captive hydra in combat.[1]

After the establishment of Falconia, Griffith and the Band of the Falcon engaged with the jötnar in a battle. Griffith is able to defeat their leader by piercing the jötunn in one of its eyes.[1] Afterward, Griffith orders Sonia to telepathically send the image of the corpse across the battlefield in order to instill fear in the remaining jötnar forces. This is followed by a "cleanup operation" in which the band members slaughter the remaining jötnar.[2] 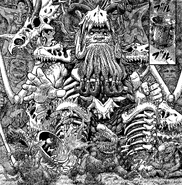 The king of the jötnar.