Inferno (インフェルノ, Inferuno?) is the first opening theme for the Berserk 2016 anime and is performed by 9mm Parabellum Bullet. The single was released on July 20th 2016.

The opening begins with Puck glancing behind him towards the camera, before flying upwards over a panning shot of a grinning Isidro, Farnese, Serpico, Casca, and Guts, who is wielding the Dragonslayer over his shoulder. Still panning upwards, the shot transitions to a red tinged ensemble of the Band of the Hawk, including Pippin, Guts, Judeau, Casca, Rickert, Corkus, Gaston and Griffith, all clad in armor as fire consumes the image from underneath, like a page burning to cinders. In the next shot, Guts rapidly swings a flaming Dragonslayer, attacking an unseen enemy, then walks with the sword resting over his right shoulder; the title appears over a close-up of Guts' face, disappearing as the Dragonslayer moves out of view.

Guts sits alone beside a river, knee deep in the water; he suddenly lurches forward, his mouth coming to his face as he sheds tears, which fall onto the water's surface and distort his reflection. A series of Golden Age flashback scenes then commence, beginning with a much brighter close up shot of the galloping hooves of Griffith's horse; Griffith can then be seen commanding the Band of the Hawk, Guts and Casca behind him. Guts descends a set of stairs with his back turned to Casca, the two having watched Griffith converse with Princess Charlotte. Next, Guts holds a feverish Casca, framed by the edges of a small cave. This shot transitions to a close-up of Guts' and Casca's faces, separated by the slightly chipped blade of Guts' sword.

Guts screams, holding up the Dragonslayer in front of an eclipsed purple sun. The shot then fades to a profile of Griffith, held up at the arms and impaled with bolts as he is tortured under the orders of the King of Midland. A fast sequence follows depicting Griffith turning and running in the cobblestone streets of his youth, a crippled Griffith being thrown forward during the Eclipse, Griffith holding the corpse of a deceased 10 year old Hawk during Ubik's manipulation of him, a shocked young Guts, and finally the activated Crimson Behelit shedding tears of blood over a pitch black background. Guts falls through the darkness, reaching out to Griffith. Blood then falls onto Casca's face, eventually covering and flowing down the entire screen. Subsequently, apostles burst through the layer of blood, making way for an action sequence in which Guts battles one such demon; he screams in rage and severs the apostle's largest horn using a short knife.

Griffith is then seen glowing a bright white as he transforms into Femto, the lives of the Hawks he sacrificed flowing into him around the image of Judeau falling to the ground dead beside Casca. Guts continues to fight against an apostle, and the scene transitions to a panning still shot of Femto raping Casca, tears visible in her eyes. Guts amputates his forearm to escape an apostle's jaws to save Casca, but is quickly forced to the ground while leaping towards Femto.

The imagery of the Eclipse cuts to a full body shot of Guts as the Black Swordsman, surrounded by fire. He swings the Dragonslayer, a shot of a regressed Casca pulling away from Guts in fear at Godo's mine is briefly shown, then Guts swings wide again, alternating back to another flashback, this time depicting Guts' camaraderie and friendship with Griffith on the battlefield before the swordsman's departure from the Band of the Hawk. In the last seconds of the opening, a quick series of images flash by, showing Griffith's reaction to losing his duel against Guts for the swordsman's freedom. The opening ends with the key cast shown at the beginning of the opening, now including Femto, overlaid on top of Guts' cape. 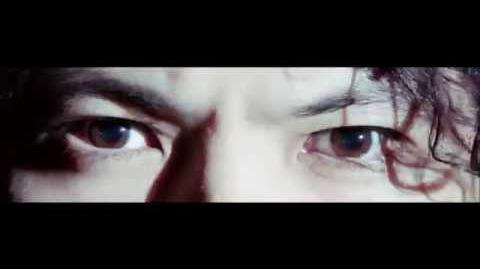 Retrieved from "https://berserk.fandom.com/wiki/Inferno?oldid=61106"
Community content is available under CC-BY-SA unless otherwise noted.