The Flower Storm Monarch (real name Danan[expl 1]) is the lord of the elves, ruling over Elfhelm on the island of Skellig.

The Flower Storm Monarch is calm and collected at all times, and is unaffected by all of the chaotic happenings beyond her domain, or by the daunting stories of her visitors. She considers it her duty to act as Elfhelm's ambassador to the mage community, in which she styles herself as a mage and acts as an attendant to the elderly gurus.[4] Her modest nature does not change when she reveals her full might. When confronting Puck and Magnifico for their apparent "plot" to usurp her throne and sell elves as pets, she calmly deduces that, rather than being a heinous plan, it is merely a poorly thought-out one, and sentences them to one day of helping the brownies with their chores.[3]

In legend, the Flower Storm Monarch is reputed for her immense power. As such, her name is recorded not only in grimoires, but also in many poems and stories.[2]

The Skull Knight intercepts Guts on the shore near Vritannis, and aware of the swordsman's destination of Elfhelm, offers his fellow sufferer some hope: that the ruler of the land he seeks might be capable of mending Casca's broken mind.[2]

Upon Guts and his group's arrival at Elfhelm, the resident witch Kukka explains that the Flower Storm Monarch possesses access to the "Corridor of Dreams", which enables her to mend the fragmented minds of subjects by looking into the deepest recesses of their hearts.[4]

When the group finally reaches Elfhelm, they meet with the great gurus of Skellig's mage community and a youthful attendant named Danan. After much discussion and a night of rest, Guts' group is lead to the throne room within Elfhelm's great cherry tree. It is at this point that Danan reveals herself to be the Flower Storm Monarch and formally welcomes the party to her domain.[5]

She quickly dismantles the attempt by Puck and Magnifico to usurp her throne, before turning to Guts and his party and addressing the reason they came: to restore Casca's mind, which she states she can most likely do through the "Corridor of Dreams". She selects Schierke and Farnese to assist in the task, asking Guts to stay behind so as to prevent Casca's strong fear of him from impeding the ritual.[3]

As she guides the three women to the ritual chamber, she explains that the Corridor of Dreams will allow them to enter Casca's dreams and find a resolution to the incident responsible for the woman's regressed mental state. Once inside an ethereal chamber of mushrooms, Danan begins the ritual, and in the form of ethereal cherry blossom petals guides Schierke and Farnese into Casca's dreamscape.[3] Following the ritual's completion and the restoration of Casca's mind, Danan states that it is Casca's decision alone as to how she will confront her trauma, and that she may now make such a decision thanks to Schierke and Farnese.[6] After Casca enters shock upon seeing Guts, Danan later gifts Farnese her old mage garbs in celebration of Farnese's magical enrichment, and sends Schierke and Farnese off to practice their magic while attending to Casca.[7] 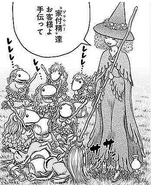