Chapter A0
The Black Swordsman

Elves are astral beings[1] which hail from the kingdom of Elfhelm, the domain of Sovereign Hanafubuku.[2] Puck and Ivalera are the two most prominent elfin characters, both of which travel with Guts in his traveling party.

Elves appear in many fairy tales, poems, and legends, but are rarely seen by human eyes.[1][2] They are creatures who exist in the Astral World, and may appear in the Physical World if they so desire. Only humans who have not closed their minds to the idea of mythical creatures are capable of perceiving them; religious zealots of the Holy See cannot.[3] As such, Farnese is only able to fully perceive Puck after secularizing herself.[4] Elves often become invisible to humans in large religious establishments such as monasteries and cathedrals, or in large crowds, though they sometimes appear to rural religious communities.[3] They can most often be observed by children.

The most famous legends involving elves include the story of Red-Eyed Peekaf [5] – a children's tale about a boy with elvish characteristics – and Sovereign Hanafubuku, the ruler of the idyllic elfin homeland: Elfhelm.[2]

Elves possess many different powers. They are capable of healing injuries, sensing people's emotions, and some even say that they have the power to bring one happiness.[6] They can create medicine with the dust that sloughs off their wings, known as Elf Dust. Although their size generally limits their usefulness in combat, they may emit a bright flash,[7] acting as a flare to blind enemies temporarily, and carry small objects.

Long ago, elves dwelled within various locations such as Godo's mining cave[8] and Rosine's tree in the Misty Valley.[9] However, in time, the Order of the Holy See established its strict doctrines and the elves were forced to withdraw to the magical island of Skellig, upon which their homeland of Elfhelm is located.[1][10] The areas once home to elves now offer sanctuary to those preyed upon by restless spirits, Guts having Casca placed in Godo's cave for her safety.[8] It is only after the cave's destruction that Puck suggests taking Casca to his homeland,[11] and subsequently, Guts learns from the Skull Knight that the elfin queen Hanafubuku can restore Casca's mental capabilities.[2]

There are different races of elves that coexist in the Astral World, with Puck and Ivalera being of the pisky race, descendants of the sylph.[12] They are famed for their bubbly, friendly and fun-loving nature. 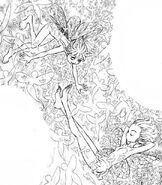 Puck rides a duck across the water.

Puck and Ivalera in Elfhelm.

Community content is available under CC-BY-SA unless otherwise noted.