Egg of the Perfect World

Egg of the Perfect World

Egg-Shaped Apostle
The Beherit Apostle
Nobody

Hermit
The Egg of the Perfect World (完璧な世界の卵, Kanpeki na Sekai no Tamago?) was a deformed outcast of society who became an apostle, watching over the city of Albion.

While initially serving as a minor antagonist in the Conviction Arc, the Egg ultimately acted as the key needed to reconstitute Griffith into a corporeal form by means of self-sacrifice.

He appeared as a squat, flesh-colored beherit with orange eyes, standing upon two human legs and two tentacle-like extensions. Also being a sacrifice, the apostle bore a Brand of Sacrifice on his tongue. He is currently the only known individual to be both a sacrifice and an apostle simultaneously.

The apostle believed in purpose and faith; he admired those who showed great passion for their beliefs, such as the cult leader and lord Mozgus, to whom he granted great powers. He himself did not like killing and avoided it whenever possible. As a human, he was an outcast who lived on the fringes of society, keeping himself out of sight in an underground tunnel. Hence, he was kind and sympathetic to the misshapen and downtrodden, granting the Demon Child peace by ingesting it and allowing the child to play a part in the birth of the Perfect World. Unlike many apostles, the Egg of the Perfect World was selfless and believed in creating a better world, not for himself, but for the betterment of others.

Pseudo-Apostle Siring: His tentacles had needles that allowed him to sire pseudo-apostles, though their forms vary wildly, often being twisted reflections of their wishes as humans.

Enhanced Agility: The Egg of the Perfect World was very maneuverable, capable of running on walls, ceilings, and the ground with ease. This was achieved through his tentacle-like arms and flexible legs, allowing him to escape his confrontation with the Skull Knight.

Before becoming the Egg of the Perfect World, the deformed human with no name or family, simply known as Nobody, was born in the outskirts of Albion. Nobody's first memory was of a garbage box; while eating refuse, he found a Beherit amongst the waste. Being ostracized for his abnormal appearance, which caused people to throw rocks at the very sight of him, Nobody was forced to dig a hole to reside in away from the company of others. However, the people of Albion, unaware of the man dwelling inside, made Nobody's home a place to dump their dead. Over time, enough bodies piled on top of Nobody to crush him under their weight. As he began to lose consciousness, his Beherit activated and the God Hand appeared before him. Having no loved ones to sacrifice, Nobody offered up the world in its current state in return for the power of an apostle, paving the way for a new "perfect world" to take its place.

From then on, having left his home, the Egg of the Perfect World begins to observe the people of Albion as refugees come to the city[1] [2], watching the atrocities committed against them by the Holy See[3] and those who have been inducted into the cult of the Goddess of Flame.[4] [5] When Casca and Guts arrive at Albion, the Egg proceeds to influence the chain of events that will lead to his ultimate purpose: the initiation of the Incarnation Ceremony. The apostle first begins by transforming the heretics' Great Goat into a pseudo-apostle[6], the ensuing battle resulting in Casca's capture by the Holy Iron Chain Knights.[7] Subsequently, he sires Mozgus and his disciples into pseudo-apostles as well.[8]

When Luca becomes separated from Guts' group and is saved by the Skull Knight, she finds herself spirited by the Egg to the site of Albion's mass graveyard, coming to her senses before a horrific Holy See altar fashioned from the skin and bones of priests murdered by the heretics.[9] The apostle reveals himself, disclosing his past to the woman, and then tells Luca of his days long vigil over her, Nina, and the others. Moreover, he explains that the hell currently consuming the city and his own actions are all preordained, elaborating that even Luca's act of bringing Casca to the city was a key element to this plan.[10] While the apostle is forced to flee when the Skull Knight makes an attempt on his life, he realizes that he told Luca everything about himself and his deeds because he needs someone to acknowledge that he once existed. Though the Skull Knight assumed that causality is preventing him from killing the Egg, his initial attack inflicted a mortal injury on the apostle.[11]

As another set of spirits force their way into the city and consume the living, the apostle's life begins to wane. During his way to the Tower of Conviction, he ruminates on what his life could have been if Mozgus had found him before he invoked the God Hand, and on the way up, the apostle comes across the Demon Child, having witnessed it ward off reanimated corpses from Casca two days ago. Knowing that the child is also dying after using up most of its strength to protect Casca from the possessed blood and Mozgus' flames, the apostle swallows the baby out of compassion; he assures the child that it can "dream in the cradle of the new world inside" of him.[12]

Once reaching the top of the tower, the apostle witnesses the malicious spirits swallow the ones that drove him away.[13]. Noticing that everything in the words desires the same as he does, his face rearranges itself while shedding tears of blood,[14] becoming a cocoon for the child as it transforms into Griffith's new body. Once the process is complete, the Egg's world to be realized by Griffith himself, the apostle's body cracks open to reveal the newly reconstituted Falcon of Light. [15] Sometime after Albion's destruction, knowing the Egg suffered greatly in life, Luca bundles up flowers and releases them into the air to make her final respects to the nameless apostle among those who died that night.[16] 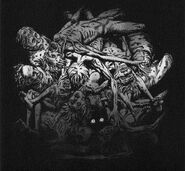 Corpses piling up on "Nobody".

The Egg of the Perfect World observing Mozgus. 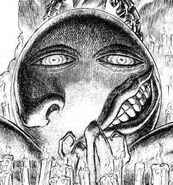 The Egg of the Perfect World smiles during the Incarnation Ceremony.

"Nobody" as a child, sifting through garbage to eat.

"Nobody" hides in the shadows as an outcast of society.

"Nobody" gazes upon the beherit that will transform him into the Egg of the Perfect World.

The Egg of the Perfect World watches Joachim's motionless body.

The Egg transforms the Great Goat into a pseudo-apostle.

Watching the protagonists from the shadows.

The Egg sits atop the spire of the Tower of Conviction, waiting for the Incarnation Ceremony.

The Egg readies himself to transform Mozgus and his disciples.

The Egg is confronted by Skull Knight.

The Egg reveals himself to Luca, explaining his plot.

The Egg shows off his own Brand of Sacrifice.

The Egg consumes the Demon Child, incubating it within himself.

The Egg passes away with a smile on his face.