Dragons are a race of astral creatures that have only been mentioned before making an actual appearance in the Berserk series in the aftermath of the Great Roar of the Astral World.

Dragons are large lizard-like creatures with big wings and tail or just a long serpent like body with no wings and limbs to fit their natural environment, be it the ocean or the earth. Due to the various family members in the dragon race, the dragon's habitat will vary. The spiked dragons have so far made their homes on top of castles while a more narrow kind of dragon, presumably wyverns, nest in canyons. Water dragons don't fly and swim in the ocean as sea serpents of which they themselves are prey to much larger ones.

Dragons are shown to like high places like castle's towers, canyons and even the vast open ocean depending of the type.

It is unknown yet what dragons are capable of aside from brute strength and being capable of flying or swimming depending of the type of the dragon.

Before the Great Roar of the Astral World, dragons were considered a myth and were the muse that led to Godot creating the Dragon Slayer at the request of his lord to answer the king's request for a sword capable of killing a dragon. Following the Great Roar of the Astral World, dragons can be seen on human cities. When Griffith and the Band of the Falcon face the jötnar in battle, their leader is seen wearing armor made from the skeletons of several dragons. 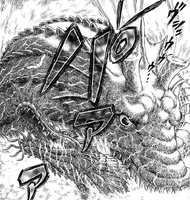 Water dragon eating another of its kin. 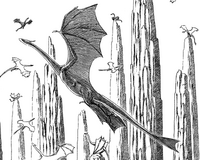