watch 01:32
What is the Demon Child?
Do you like this video?
Play Sound

That girl... was with child. That shapeless fetus, which was only just conceived... was possessed by evil. And so it has taken on the nature of a demon. It is a cursed child.
– Skull Knight

The Demon Child was the offspring of Guts and Casca, brought into the physical world as a small misshapen imp after being tainted by Femto's rape of the pregnant Casca.

The Demon Child appeared almost exclusively at night, but during the day would sometimes manifest in a shadowy area to avoid the sun. Despite it never speaking, its actions revealed that its intelligence may have been of a higher grade than that of a two year-old, its chronological age.

The Demon Child appeared as a monstrously misshapen fetus with a reddened left eye. It was born as a minuscule creature but, only moments later, grew exponentially until it rivaled a several month-old infant in size. It was hairless and had an infantile face with a tumorous bump on its forehead that covered its right eye. Each of its limbs ended in fingerless tendrils, necessitating that it crawled on its stomach when it manifested, and it had a small tail.

Not much is known of the Demon Child's personality since it did not speak, but its behavior hinted that it was capable of cognition beyond what is normal for the average two-year-old. After the Child's birth, it is explained by the Skull Knight that Guts and Casca's child accepted an evil nature, but would nevertheless maintain a kindred bond with its parents. This statement appeared to be valid - the Demon Child appeared to Guts numerous times during his two-year stint as the Black Swordsman and showed no obvious malicious intent, and even motivated Guts to avenge Vargas' death.

The Demon Child also appeared to Casca several times while she was in Albion explicitly to protect its mother, who was thought to be a witch by the religious locals and refugees. Its love for its mother was made obvious in that its power was completely spent by the end of the night, allowing the Egg-Shaped Apostle to manipulate and swallow it without any struggle.

The Demon Child appeared to possess some form of control over regular spirits that reside in the Astral realm, being able to command them to act against all humans with the notable exception of Casca, who was swallowed by the corrosive blood that the spirits possessed in the Tower of Conviction, but was otherwise left unharmed. The Demon Child was also able to induce hallucinations in the people around it; Guts had twice witnessed the event wherein the Child would morph its face into that of someone else.

The child was conceived when a newly returned Guts had sex with Casca, impregnating her. During the Eclipse, Griffith offered the Band of the Falcon to be reborn as the God Hand member Femto. Upon his transformation, Femto flew down to Casca and raped her in front of a trapped Guts. Sometime after the Skull Knight saved her and Guts, Casca prematurely gave birth to a malformed fetus that increased in size until it was no bigger than an infant. Upon first seeing the child being born and realizing Griffith's corruption, Guts attempted to kill it with Casca stopping him. The Skull Knight informed Guts that child was his and that Griffith had tainted it. Guts tried to kill the child again while Casca bit his arm before the infant faded before their eyes as the sun rose. After Guts embarks on his quest for revenge, out of a need for a parent's love, the Demon Child proceeded to follow its father.

As Casca being placed in Godot's care and kept in the elvish mine prevented her from bring attacked, the Demon Child spends the next few years following Guts on an almost nightly basis out of a need to be by its parent's side. As a result, with Guts loathing it further, it plagued his moments of rest while watching closely over him. But as an Incarnation Ceremony in Albion comes closer, sensing the events about to unfold that may result in its mother's death, the Child appears before Guts and alerts him of Casca being in incoming danger.

The Child eventually appears in Albion to protect its mother from the restless spirits of the holy city's dead. Whenever Casca was about to harmed by the spirits when they took over a physical body, the Demon manifested to silently command spirits to leave. But when the Incarnation Ceremony is close to begin, the Demon Child exhausted most of its life force to shield Casca from both spiritually possessed blood of the wrathful dead and the flames of a recently transformed Mozgus. The Demon Child vanished soon after while Guts would save Casca in its place.

On the verge of death, the Child was found by the apostle known as the Egg of the Perfect World. The apostle, also on the verge of death as he is about to fulfill his role in the ceremony, swallows the Demon Child so that neither would have to die alone. But within the apostle's stomach before he shatters, as the Incarnation Ceremony runs its course, the Demon Child gradually developed into a human infant before gradually maturing into part of the vessel for Griffith's essence to take residence in. Though now existing as part of Griffith's new corporeal form, faint traces of the Demon Child's need to protect Casca appear to have some influence on Griffith as he found out while at the Hill of Swords. 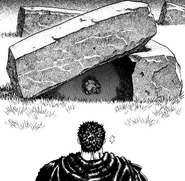 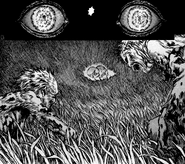 The Demon Child repels evil spirits away from Casca.

The Demon Child leaving after protecting Casca from possessed pagans.

The Demon Child fully developed into a human infant. 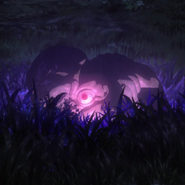 The Demon Child as it appears in Guts' nightmare.

The exhausted Demon Child is comforted by the Egg of the Perfect World.

Retrieved from "https://berserk.fandom.com/wiki/Demon_Child?oldid=83507"
Community content is available under CC-BY-SA unless otherwise noted.