They resemble misshapen humans with horns and large teeth and tusks. They fight with spears made of twisted horn.[1]

It is unknown if they can act out on their own since Kushan magic users are often around, or if the latter is killed the former wakes up from mind control similar to those of the pishacha.

Despite their fearsome appearance, they have not been shown to be much more dangerous than ordinary soldiers, especially not when facing Guts or Griffith's apostles.[2] [3] When a daka is slain, its corpse will slowly revert to its natural human form.[4]

The daka are product of an alchemic process overseen by Daiba via the Man-Made Beherit created from the sewn bodies of still alive apostles and filled with amniotic fluid. As the apostles' interiors are linked to the Astral World, when a pregnant woman is lowered into it, the human fetus is infused with evil and is rapidly mutated into a creature that rips out its mother's stomach, killing her in the process. The new born Daka is then kept in a cage with its kind, fed on the meat of their dead mothers and raised to serve Ganishka.[5]

When the Man-Made Beherit was put to use in Wyndham, the Kushan took many of the young women to be impregnated with what would become daka.[6] The daka that were already matured were used against the reborn Band of the Falcon when they stormed Wyndham as a diversion to allow their leader Griffith to spirit away Charlotte in the chaos that ensued.[7] The surviving daka were later deployed alongside the pishacha and the makara as a vanguard army to devastate Vritannis so the main army can conquer the ruined city the following morning.[2] In the morning, Daiba ordered the harashada to force both daka and pishacha to commit suicide so that they didn't fall into the hands of the enemy alive.[3]

The daka in Wyndham. 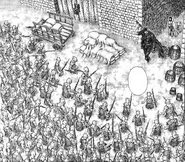 Guts against the daka in Vritannis.