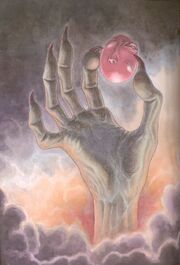 In this world, is the destiny of mankind controlled by some transcendental entity or law? Is it like the hand of God hovering above? At least, it is true that man has no control, even over his own will.

Causality (原因結果, Gen'in Kekka) is the principle of cause and effect in the world of Berserk. On its own, causality is simply an abstraction and is divorced from destiny (also known as fate), which is an arbitrarily powerful enforcement of predetermined events in conjunction with the inevitable events predetermined by such an enforcement.

The Idea of Evil applies causality in its dictation of humanity's destiny.[1]