What's on your mind?

I know this has been discussed many times before but I'm planning to make a full-sized Dragon Slayer but I want to make sure the design is right before I start so I want to know how big other people think it is. In my design it is 216cm/7' 1" tall, 5cm/2" thick and 30cm/11.8" wide at the bottom and 20cm/7.9" at the top which worked out as about 130kg/286lbs. It comes down to how tall Guts is. As Miura was known for his attention to detail and the story has a very European setting, Guts looks to be about 10" taller than the average height of a European male which is 5' 10" making Guts 6' 8". Obviously this could be wrong and it also says this in the Official Guide Book but most people don't trust what the guide book says due to many of the things said being questionable. Which is why I'm asking what you all think. Any ideas you have would be a great help and if you notice any other issues in my design in the picture please let me know. 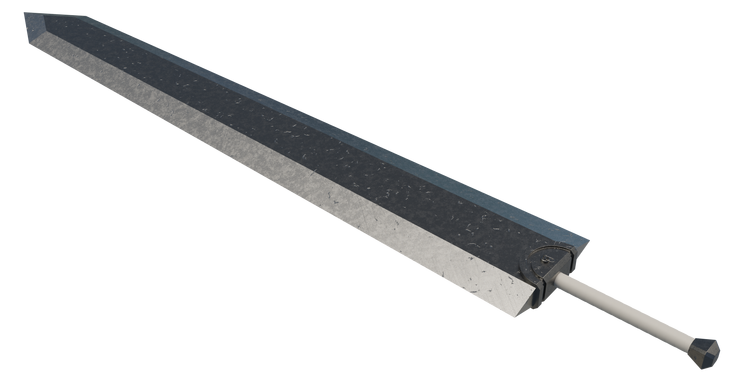 I made this beat by remixing BassNectar with Berserk. Guts vs. Griffith

I don't know if this will be the very last, but I won't miss it for anything 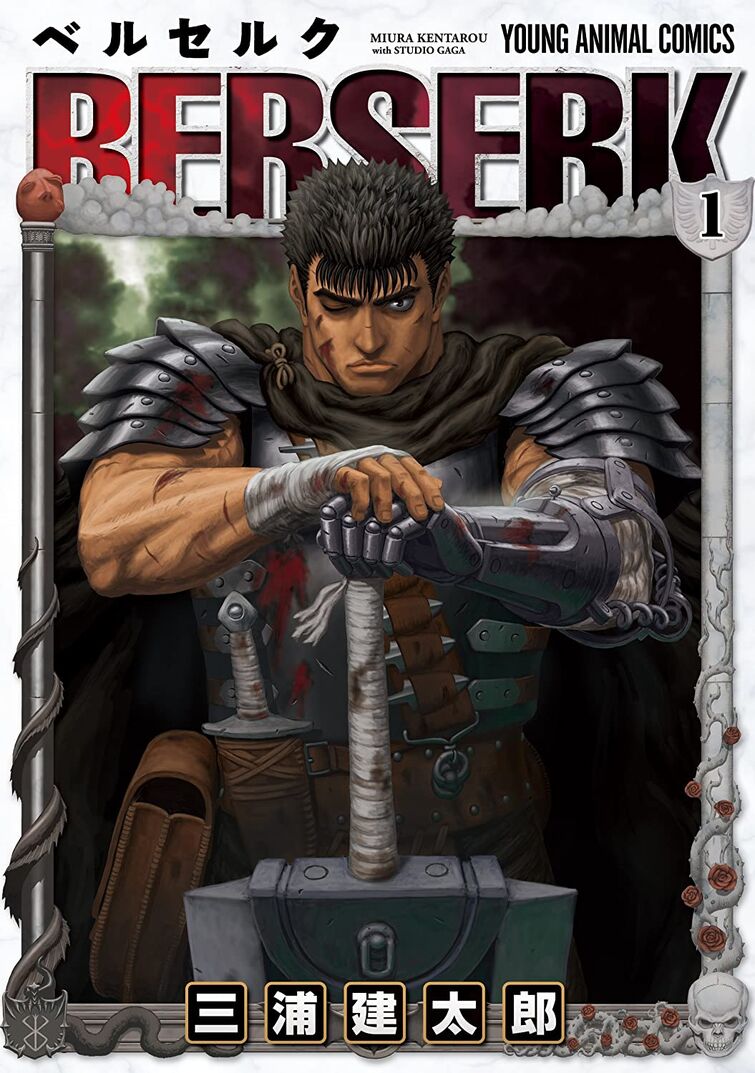 I recently read berserk and I partially spoiled myself and how the story goes, and I was amazed and pulled into the world of berserk. The things going through my head are like "Wow this is the most realisitic medieval story I've ever read" and "this is my favorite seinen, next to Punpun. And when I heard that Miura passed away, it shocked me. I thought of the fanbase on how they're so dedicated and patient on the mangaka writing chapters for months and years on end. And this made me feel even sorry to the fans who've been there since and beginning or been there for so long. Also, this makes me feel bad for the people who don't know of how amazing the artwork and story is. I feel bad for Miura for not being recognized for his hard work. So overall, I'm sorry for all the fans on Miura's passing and their intense and amazing dedication to the series. You all have my respect for dedication waiting for such an amazing mangaka

On May 20, 2021, publisher Hakusensha announced that Miura had died on May 6th, 2021 due to an acute aortic dissection.

He will live on through all who have been and will be impacted by his various works of art. 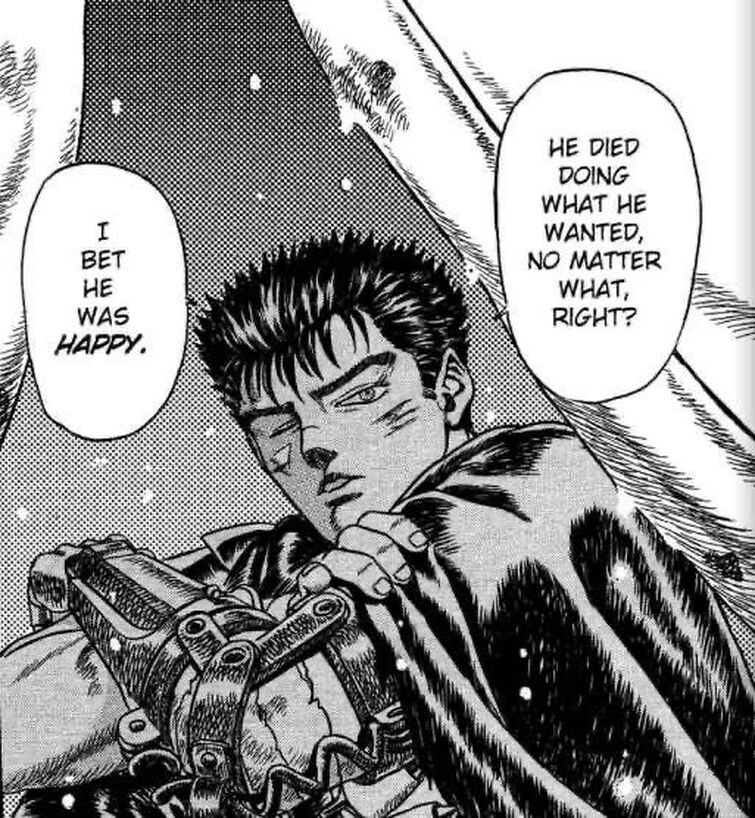 Hi! I’m Rinne, and I just started a Berserk Discord Server. I would really appreciate it if you joined!↓↓↓

Join the The Eclipse Discord Server!Discord

Confused to how much seasons there is of this.

If only they had asked wiki users. Images taken from the first Google result they came across, blatant lies (apparently, the Berserk world has lizard people aplenty) and Totally Berserk References (tm) everywhere. I very much suspect the writer watched this video and called it a day.

I have some free time, so I'm going to analyse it. Keep in mind I'm not well-versed on the Souls series, so I'll try to avoid commenting on them. Please, feel free to correct me if I make any mistakes.

Who set Flora's tree house on fire, when Griffith apostles marched to get her?
Why didn't Skull Knight save her? He did that before when savings Guts and Casca from the eclipse.
Flora made a huge wall of flame to help Guts and his companions escape, She could have used that in the first place as a line of defense against Griffith apostles.
Did Flora set herself and her house on fire?
Why Griffith wants to capture Flora or kill her?

I can see the time and how it s moving (with different speed) but how to move in it (back and forward :) I suppose - somebody must know :) Please share the secret :)

(edited by A Fandom user)
Timeline

OK so I've been acting completely restlessly when it comes to Berserk--with Private Investigators' type of string theories on my wall, desperately trying to put the pieces of the puzzle together--because I love it so much and I just don't understand what happened 1000 years ago that led to this moment.

I've studied countless discussions, coming to such conclusions as: 1) Gaiseric is the Skull Knight, 2) Void somehow betrayed the old King, 3) The entire manga revolves around the One Night where Gaiseric's entire Utopia got smashed by the previous God Hand, 4) We're being lied to in some way.

After countless sleepless nights, I actually came across a fact that I felt really stupid for not noticing before, and I'd like to share it with you because I believe that it is one of the missing pieces of the puzzle. It proves that 1) either we have been lied to this entire time or 2) something has happened and it's been right before our eyes this entire time. It might just be extremely well hidden.

OK so here it is. Void mentions the all mighty law that a God Hand is born every 216 years or so, right? And he says that the fifth god hand gets to be reincarnated, every 1080 years or so, right? The thing is, first of all I feeled like Griffith/Femto is getting played like a chump and he knows it (which is common to every biggest villain in a manga, take Madara in Naruto, Acacia in Toriko, etc etc). Second of all, we know that what led to this entire situation with the God Hand being a**holes, the Skull Knight looking to get revenge, and the law of causality "repeating what once happened" came from 1000 years ago. Why? Well because it's mentionned hundreds of time. Zodd says to the Skull Knight "You've been facing us for a millennia now", it's mentionned a couple of times that the Skull Knight/Gaiseric's story dates back 1000 years, so we can assume to some extent that yes the first God Hand was Void (seeing as how Skull Boi immediately goes for his head when he pierces through the eclipse.)

BUT ONE FACT JUST DOES NOT MAKE SENSE.

Did you find it yet, or do you feel like I'm messing with you? See that's what I was saying, all the facts may be in front of you, but you might not actually notice them right then and there. OK HERE IT IS. If the timeline of causality begun 1080 years ago, which it most likely did, and the Fist God Hand, or Void, was born during Gaiseric's time, then there is a HUGE 216+ years worth hole in the timeline that we're not being told exists. Why? Well if we consider that Gaiseric's compared to Griffith and Guts' time is year -1080 in the causality timeline--which would only make sense because Void says a God hand is reincarnated every 1000 year after the five God hands are created--then the second God hand (perhaps the guy that like to mess with your mind) would have been created in year -864, the Third in year -648 (so the princess of whores or whatever), the Fourth (or mouth boi) in year -432... AND HERE WE ARE! There is a huge hole in the timeline.

So I personally believe that the entire story doesn't actually revolve around Guts and Griffith, because that's soo classic of mangakas to tell us "Here is the story, aren't these two characters great?" and then at the very ending of the last arc you realise it's never actually been about them and they're gonna have to take care of some 1000 year old BS that they had nothing to do with in the first place. I think that Void is behind everything, and that he maticulously assembled this specific team of God Hand to have his causality BS and trick Griffith in following some kind of evil plan he's hatched since back when he was in Gaiseric's dungeon (I mean look at his face, it's so obvious he's been tortured senselessly!). And I think that there is a HUGE piece of the puzzle that we're missing, and perhaps with the power of friendship (ASSEMBLE FAIRY TAIL GUILD, WE WILL USE THE POWER OF LUCY'S BOOBS TO VANQUISH EVIL) we could all find it together and bring an end to my sleepless nights.

Anyways, if you guys have some insights or if you have already gone further than I have, please help me sleep! I need to sleep people hahaha I really need to figure out what's going on. Arigatooo mashitaa

I love one of Guts' quotes; "You have the strongest armor because you are the weakest but I can't remember when he said that... Can someone help me out?

This may come handy for those without space at home and adding HQ images for the wiki: https://www.darkhorse.com/Blog/2558/sdcc-2017-dark-horse-acquires-digital-rights-berse

I think we could with Navigation templates for non cannon/video game characters and locations.

(edited by Besty17)
Am I the only one to notice a Cthulhu type monster in the anime?.....
(edited by BeyonderGodOmnipotent)

its been a while, and i have been thinking about how old casca is

We currently have a page that lists all so called Minor Characters, personally I feel this is completely unnecessary for to me all lives, I mean all characters matter and just on many other wiki's all of them deserve their own place especially when most of them are bound to appear again, I mean the secondary prostitutes both appear in tower of conviction arc and in the fantasia arc. Also fiery already made links to them in one of her recent edits. Also if all of them have their own page this will make it so much easier for me to update all the character and chapter pages next year. So if anyone has objections to them getting their own page vouch them here, if this doesn't happen then next month (a week from now) I will start making them.

i think the studio doing berserk should really put the effort and time into the Falcon of the millennuim empire, what do you guys think